Share
Alan Moore and Frank Miller look set to be starring in a reboot of Grumpy Old Men.  The two famed comic creators have been spouting their own unique brand of politics publicly and it seems to have caused a bit of a rift.  Moore condemns Miller’s work as misogynistic, homophobic and misguided after Sin City creator’s.  Miller finds the occupy movement stilted and staged.  Read below about the whole fine mess. 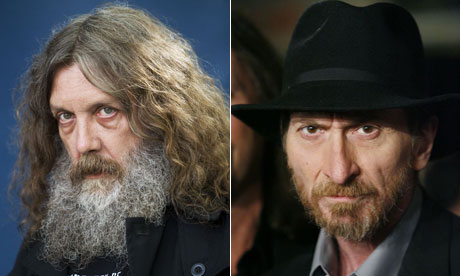 Alan Moore, one of the most influential comic book creators of the past few decades, has launched an attack on fellow industry stalwart Frank Miller, condemning his work as misogynistic, homophobic and “just completely misguided”.

Moore, who is English, created critically acclaimed comics including V for Vendetta and Watchmen while the American Miller is responsible for Sin City and the seminal Batman comic Dark Knight Returns. Both have helped to reshape the comic book industry, with much of their work adapted for film.

Moore spoke after Miller launched an attack on the Occupy movement, describing it as “nothing but a pack of louts, thieves, and rapists, an unruly mob, fed by Woodstock-era nostalgia and putrid false righteousness” on his blog last month.

Asked by British independent publisher Honest Publishing for his thoughts, Moore said that he and Miller “have diametrically opposing views upon all sorts of things, but certainly upon the Occupy movement“.

Moore described the worldwide anti-capitalism protests as “a completely justified howl of moral outrage” and said they had been “handled in a very intelligent, nonviolent way, which is probably another reason why Frank Miller would be less than pleased with it”.

Moore predicted that “if it had been a bunch of young, sociopathic vigilantes with Batman makeup on their faces, [Miller would] be more in favour of it”.

Miller sparked anger when he wrote that Occupy “is nothing short of a clumsy, poorly expressed attempt at anarchy” from “a bunch of iPhone, iPad-wielding spoiled brats who should stop getting in the way of working people and find jobs for themselves” because “America is at war against a ruthless enemy [al-Qaida and Islamism]”.

Moore said the comments were “about what I’d expect from him”. He added: “Frank Miller is someone whose work I’ve barely looked at for the past 20 years. I thought the Sin City stuff was unreconstructed misogyny; 300 [a 1998 comic book series] appeared to be wildly ahistoric, homophobic and just completely misguided. I think that there has probably been a rather unpleasant sensibility apparent in Frank Miller’s work for quite a long time.”

Moore, who calls himself an anarchist – in his graphic novel V for Vendetta the revolutionary V, wearing a Guy Fawkes mask, works to bring down the government – believes the Occupy protests are “just ordinary people reclaiming rights which should always have been theirs”.

He added: “I can’t think of any reason why as a population we should be expected to stand by and see a gross reduction in the living standards of ourselves and our kids, possibly for generations, when the people who have got us into this have been rewarded for it – they’ve certainly not been punished in any way because they’re too big to fail. I think that the Occupy movement is, in one sense, the public saying that they should be the ones to decide who’s too big to fail.

“As an anarchist, I believe that power should be given to the people whose lives this is actually affecting. It’s no longer good enough to have a group of people who are controlling our destinies. The only reason they have the power is because they control the currency. They have no moral authority and, indeed, they show the opposite of moral authority.”