SCRAP, who has been creating immersive and adventurous puzzle events since 2007, has announced the dates for the upcoming Escape from the Walled City, Attack on Titan Real Escape Game Dates for both SF and LA. On Sunday, February 1 at AT&T Park in San Francisco there will be 3 runs ( or events as they call them)  10:30 a.m. PST, 2:30 p.m. PST, and 6:30 p.m. PST. Each event will last for one and a half hours and including a intro and solution walkthrough. In Los Angeles events will be held at Weingart Stadium at East Los Angeles College on Saturday, March 21. Again there will be three events taking place at 10:30 a.m. PST, 2:30 p.m. PST, and 6:30 p.m. PST. The New York Dates have yet to be announced. 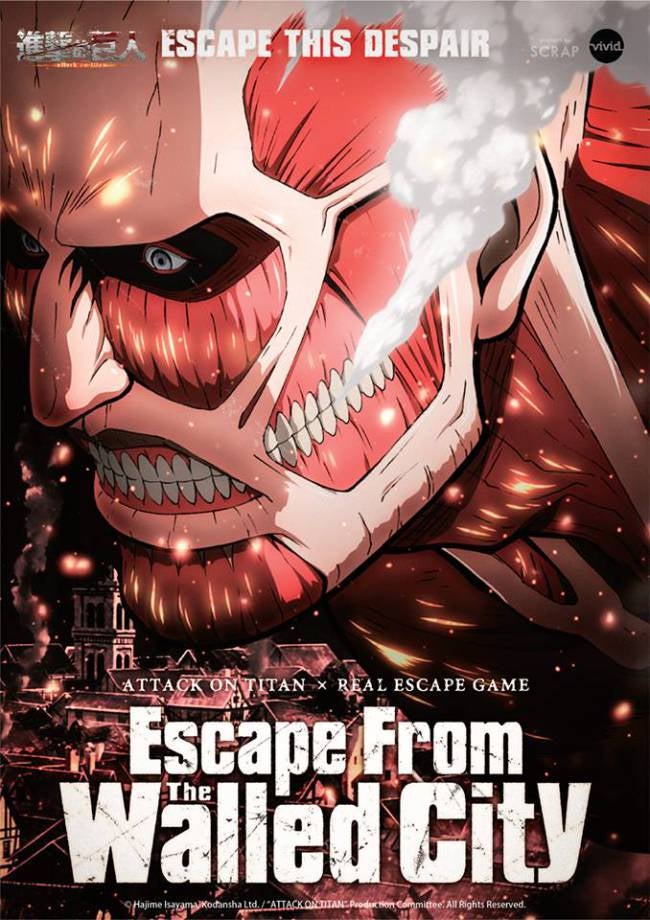 More information about the events:

SCRAP’S DREAM COLLABORATION DROPS PLAYERS IN A STADIUM IN ITS LARGEST GAME YET!

The titans are coming, and they’re hungry. Based on the manga megahit, Attack on Titan, the newest Real Escape Game (REG) takes players to a world inhabited by giant, humanoid creatures that live for no other purpose than to make a snack of all of us. The high walls of the stadium are the only thing keeping you safe… for now. Experience the latest edition of SCRAP’s interactive storytelling and puzzle-solving games, ¨Escape from the Walled City,¨ on a scale never seen before. Join thousands of other players as you decode clues inside a real stadium! Each REG requires participants to use their best detective skills as they race against the clock. Be warned, though: survival isn’t easy, and teamwork will be essential if you hope to survive. Escape or not, the game is going to be killer! This event will be held in stadiums in San Francisco, Los Angeles, and New York. After already hosting over 40,000 players in the US to date, the SCRAP team is excited to present a new project with such a grand scope, keeping them at the forefront of live escape entertainment!

-There is no team size limit for this scenario. You can play by yourself or team up with as many people as you’d like! [We recommend teams of 3 to 6 people for the best game experience.]

-All aspects of the game will be in English. As always, the puzzles require no special skills or knowledge to solve. Knowledge of Attack on Titan is not necessary for gameplay but will make your experience more fun! So, watch the anime or read the manga!

-Please dress comfortably – remember that this is an outdoor event, so dress for the ever-changing SF weather – and DO NOT wear heels! The stadium strictly prohibits wearing heels on the stadium field.

-Cosplay is welcome and a great way to immerse yourself Attack on Titan story! The guidelines for cosplay will be updated later.

-The event will take place, even in the rain. In more extreme situations, such as natural disasters, check our website and Facebook page for event updates.

-All games in San Francisco, Los Angeles, and New York are the same. Players can only participate in one game during this period.

-You can take photos of the clues during the game. BUT please do not upload ANY spoilers to the internet or Social Media or tell other people the answers or puzzles. That is NOT cool.

-The prize for winning is the priceless moment when you finally find the solution and everything falls into place. There WILL BE GLORY (and bragging rights)!!!

-Failure to escape, however, is nothing to be embarrassed about. Time is short and the mysteries are tough. Don’t worry! If you don’t escape, we will still allow you to leave the stadium. Keeping you against your will is breaking the law!

-The prize is the priceless moment when you finally find the solution and everything falls into place. And you will be honored.

About Attack on Titan

Attack on Titan (進撃の巨人 Shingeki no Kyojin) is a Japanese manga written and illustrated by Hajime Isayama. Devastated by insatiable man-eating giants called Titans, the entire human race has retreated to the safety of a single city protected by 164 ft-high walls. But with the appearance of an immense Titan, humanity realizes that its defenses may no longer be enough, and it teeters on the brink of extinction.
©Hajime Isayama,Kodansha/”ATTACK ON TITAN” Production Committee. All Rights.

Just another G33k out in the verse having fun and helping spread g33k news and culture everywhere!!
@@jereslack
Previous Comic: Second #DC1Million Giveaway Is Here! This Time An Awesome Batman Figure Prize Pack
Next TV:New Arrow Promo For Next Episode ‘Left Behind’