Translated Description from the teaser video:

something funny A beautiful seaside town, Duko-cho. In this town that looks peaceful, a strange event, such as a death or death incident, has begun to occur one after another – a

high school student living in this town – Shuzo Oriental. It looks bad, but owner of a kind hearted personality. He has a special ability called a stand, and the stand of Yusuke can repair others’ injury or broken just by touching it. Yusuke, who knew that a series of incidents is the work of those using other stands, stands up to protect the loved town!

Defective never seen by anyone · Yamazaki Kenito! A strange suspense entertainment to give with luxury cast!
The original is “JoJo’s Bizarre Adventure” published by Shueisha with more than 100 million copies published in the series. The realization of this popular manga that everyone has heard has finally realized in the year of commemoration of thirty years since the series began. Director Takashi Miike is highly appreciated at overseas film festivals including Cannes. It is Yamasaki Kenjin who plays the leading role JoJo Oriental Shosuke. A young No.1 actor Yamazaki boasting overwhelming popularity by its presence that deprives the viewer’s heart opens a new ground that no one can imagine. For the co-starring, super-luxurious casts of leading class such as Kamiki Ryunosuke, Komatsuna Nana, Okada Masao, Serious Kyo, Yamada Takayuki, Iseya Yuusuke gather. In order to create a magical town of the mysterious cityscape as the stage, I took a picture in Sitges, the seaside town of Catalonia, Spain.

The coolest, the most strange suspense and entertainment is born!

The film’s title is JoJo’s Bizarre Adventure: Diamond wa Kudakenai Dai-Ichi-Shō (JoJo’s Bizarre Adventure: Diamond Is Unbreakable Chapter I), though the staff have not yet confirmed additional installments for the series. The film will open in Japan on August 4. The film has finished its overseas shooting in Sitges, Spain, and is also shooting in Japan. 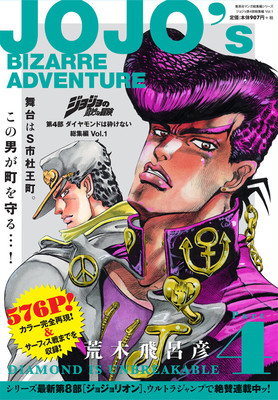 JoJo’s Bizarre Adventure: Diamond Is Unbreakable is the fourth part of Araki’s JoJo’s Bizarre Adventure manga. The story is set in Morioh, located in S City in M Prefecture of Japan, and it follows the misadventures of Jōsuke Higashikata and his companions, as they are involved in a series of bizarre incidents in their town.

Araki serialized the fourth part of the manga in Shueisha‘s Weekly Shonen Jump magazine from 1992 to 1995. David Production has been adapting the manga into multiple television anime series, beginning with Part 1 in 2012. The studio’s television anime adaptation of Diamond is Unbreakable premiered last April, and Crunchyroll streamed the series as it aired in Japan.

Viz Media is releasing the manga in North America, although its releases have not yet reached the fourth part.