Film: Doctor Who Season 10 Episode Titles Give A Glimpse At What To Expect This Season

The newly released Doctor Who Season 10 episode titles for the first ten episode give us a good glimpse at what we can expect for what we expect to be an intense season with everything change following its conclusion. The new season premieres this Saturday, April 15th at 9 p.m. ET.

Titles and teases from Steven Moffat below:

Moffat says that viewers will see a “frozen Thames” and “possibly an elephant”. Oh my.

This could be one of the episodes of the series, and Moffat isn’t going to be quelling any hype.

“One of my favourite episodes ever,” he says. “I think you’re going to love this one. Clever and creepy, classic and brand new, this one’s got it all.”

Episode 7 – ‘The Pyramid at the End of the World’

Another ominous title, as the Doctor appears to be taking a trip to a year where all life is pretty much extinct on our home planet.

“Basically, [writer Peter Harness] wanted to find quick and efficient ways of wiping out all life on Earth,” Moffat says. “The terrors of the modern world are never far away when Peter is in control of the TARDIS.” 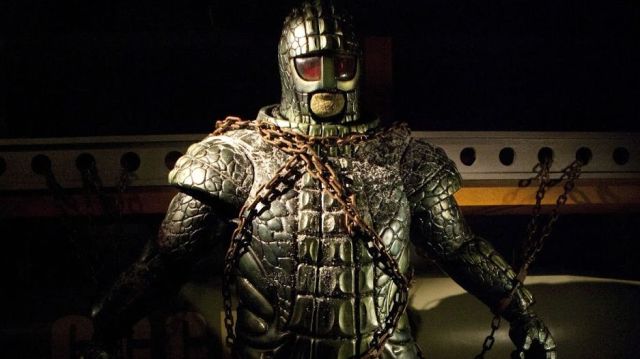 An Ice Warrior hive on Mars. Tonnes of Ice Warriors. And, according to Moffat, we’ll see “some Victorian soldiers” as well. Intriguing.

Given that the title interestingly uses the word “Empress”, and after comments made by Gatiss that there will be a “new kind of Ice Warrior”, it seems very possible that we will be seeing female Ice Warriors.

Just another G33k out in the verse having fun and helping spread g33k news and culture everywhere!!
@@jereslack
Previous Game: The Elder Scrolls Online Is Having A Free Play Week
Next ConReview: Grape City Con 2017