Have a look at this official Game of Thrones Risk board game. The GoT version of Risk should be out in August and will cost $74.95 he two custom game boards display the “Game of Thrones” Known World, and offer three different ways to play. There is a War of Five Kings game in Westeros for 3-5 players that features the Houses Martell, Stark, Baratheon, Lannister and Tyrell. A 2-player game allows you to contest the rule of Ghiscari slavers in Essos, featuring Houses Targaryen and Ghiscari. Finally, combining the two maps with seven players allows one to combat all seven Houses.

Player boards will be customized for each House and allow you to track your progress in terms of territories, ports, castles and victory points.

Character cards will let you use the battle skills of four of the most powerful members of each house. For example, a Daenerys Targaryen card can be played when declaring an invasion, and lets you replace all 6-sided dice with 8-sided dice. The Cersei Lannister card can be played if you conquer three or more territories in the turn, and allows you to draw an extra territory card.

Other special features of the game include:

-Territory cards that let you stake your claim on the lands you rule.

-Maester cards for using tactical skills and the wisdom of a Maester in battle.

-Objective cards to complete conquests in pursuit of the Iron Throne.

-Gold dragon coins to collect for wealth and purchasing power, like a Lannister who always pays his debts.

-Special unit tokens for military deployment to outnumber and outmaneuver opponents in battle. 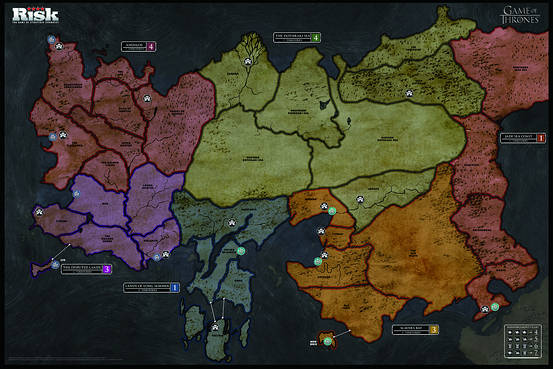 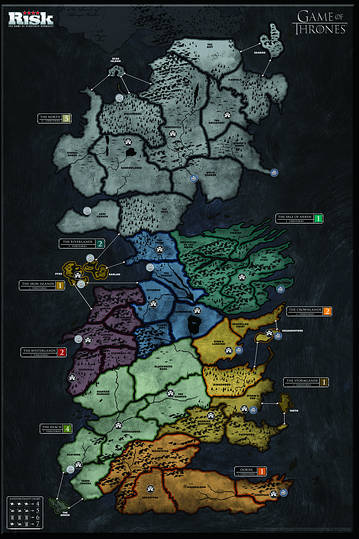 Just another G33k out in the verse having fun and helping spread g33k news and culture everywhere!!
@@jereslack
Previous Film: New Promo For The Hunger Games: Mockingjay – Part 2
Next Film: New “Teen & Adult” Oriented Transformers Webseries From Hasbro And Machinima