Thanks to Entertainment Earth you can pre-order what looks like to be some fun new Monopoly games: Dragon Ball Z Edition, Bob’s Burgers, Guardians of the Galaxy Vol. 2, and The Walking Dead TV Show

“Chorizo Your Own Adventure Burger” in this one-of-a-kind edition of Monopoly! Buy, sell, and trade locations from Seymour’s Bay, including Jimmy Pesto’s Pizzeria, Wagstaff School, Beville’s, and Wonder Wharf. Choose your favorite custom character token to travel around the board and relive your favorite moments from the show. Grab your apron and get cookin’ with the Bob’s Burgers Monopoly Game! 2 to 6 players. Ages 8 and up.

The Guardians of the Galaxy Vol. 2 Monopoly Game offers fans of the Marvel Cinematic Universe a unique game play adventure as they recruit characters from both Guardians of the Galaxy films, collecting bounties and double crossing their opponents while enjoying the classic table top experience of one of America’s favorite board games. The 6 player tokens resemble Star-Lord’s Mask, Young Groot, Rocket’s Blaster, Gamora’s Sword, Mantis, and a Cassette Player. This monopoly is a must have for fans of Guardians of the Galaxy movies. For 2-6 players. Ages 8 and up. 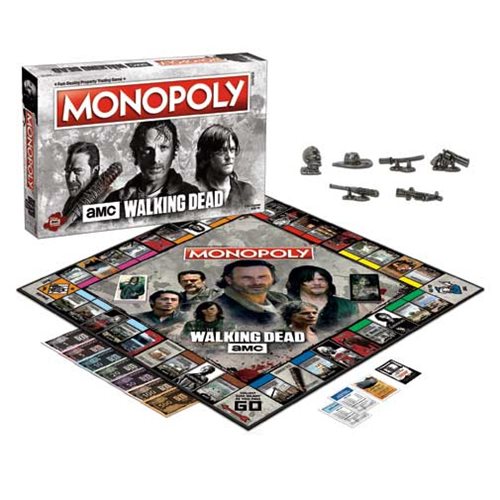 The apocalypse is here and life as you’ve known it has given way to a bloody chaotic fight for survival. Live to see another day in The Walking Dead TV Show Monopoly Game as you acquire and defend safeguard locations featured throughout the hit AMC The Walking Dead television series. The 6 player tokens resemble Michonne’s Katana, Rick’s Revolver, Carl’s Hat, Daryl’s Crossbow, Negan’s Lucille, and a Walker Head. This monopoly is a must have for fans of The Walking Dead TV show. For 2-6 players. Ages 18 and up.

Just another G33k out in the verse having fun and helping spread g33k news and culture everywhere!!
@@jereslack
Previous Film: Official English Dub Trailer For ‘Your Name’
Next Film: New Trailer For Despicable Me 3