Fans Discover Creepy Scrapped Skyrim Features, Add Them Back In 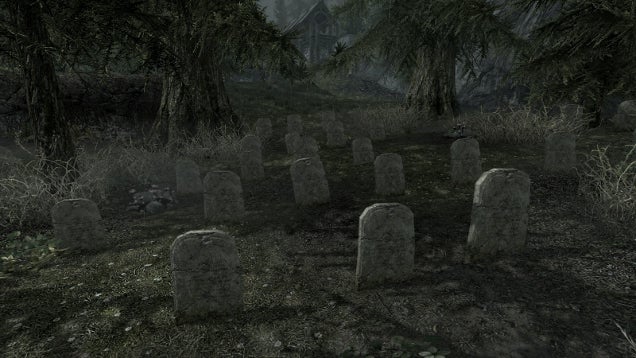 At one point in its development, Skyrim was gonna be a lot more… macabre.

Digging through game files, Skyrim fans uncovered two scrapped features that would’ve made NPC death a bit more meaningful. Once upon a time, the fantasy role-playing mega-behemoth was set to include haunting and mourning. Here’s how they work:

Haunting: when a unique NPC with family dies, there will be a random chance that it will—after some time—“resurrect” as a ghost that will follow a relative for the rest of the game. Only NPC with generic voice files (don’t expect to see Ulfric as a ghost), and only a single NPC in the whole save. You won’t be able to fill Skyrim with ghosts (it was left like that by Bethesda).

Mourning: when a unique NPC with family or friends dies, their relatives/friends will do some comment about their loss to you on their hello dialogues.

Somewhat fittingly, vagonumero12 resurrected the two features as a mod, which you can download over at Nexus. It’s a super small download since—as vagonumero12 points out—most of the files are already in Skyrim’s code.

Now, as interesting as both features sound, it’s important to note that they were never properly finished. So, for instance, mourning dialogue is pretty limited across the board. Weirdly, however, the dialogue was recorded by all generic NPC voice actors, so you can theoretically get things like children mourning their husbands and daughters. Uhhhhhhh.

Still, it’s pretty cool that a) this stuff exists and b) fans found and restored it years after the game came out. I’d love to see both ideas expanded on in other open world games. I feel like it might make me think twice about chopping up random NPCs like dead-eyed salami or using them for my Fus Ro Dah golf games. I mean, I’d either get sad—assuming mourning was expanded to be a more pervasive, life-changing thing—or develop a crippling fear of ghosts (aka, the main reasons I don’t kill people in real life). Maybe it’s just me, but if I’m gonna play a blood-soaked mass murderer, it’d at least be cool if some games handed me a mirror every once in a while.

A geeky girl with a love for comics, makeup and television. Cosplayer and jewelry designer. Check out my Etsy Store Kittens Geekery or me on facebook at KIttenSpeaksGeek
@http://www.twitter.com/raynekitten
Previous Ken’s Comic Ramblings #13: Legion of Confusion
Next Teddy Bear vs Monster