Fans of both Marvels X-men and Munchkin should be excited because we are getting X-Men Munchkin!

It’s the game every mutant has been waiting for! Join the X-Men on a thrilling adventure to defend mankind from
renegade mutants. MUNCHKIN: X-Men Edition combines Marvel’s beloved collection of X-Men comics with the
role-playing fun of Munchkin. Players take on the role of students attending Xavier’s School for Gifted Youngsters
and team up with Professor X, Wolverine, and more super-charged mutants to take down the likes of Sabretooth,
Juggernaut, and the almighty Magneto. The game will include 128 Door and Treasure cards, four player Role cards,
four level trackers, game rules, and a custom die.
Be one of the first to own a piece of the game! Join USAopoly (booth #908) and Steve Jackson Games (booth #101)
at Board Game Geek Con November 16th-20th and pick up a MUNCHKIN: X-Men Edition custom bookmark. This
bookmark acts as a card during gameplay and gives the player an advantage.
MUNCHKIN: X-Men Edition will be available March 2017 at game & toy stores and specialty retailers in the United
States and Canada.

Entertainment Earth has it on pre-sale for this April: 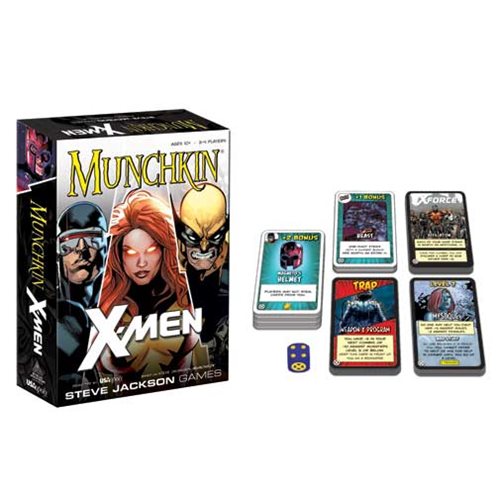 In X-Men Munchkin Game, players take on the role of young mutants attending Xavier’s School of Gifted Youngsters. Students start at Level 1 and work their way up to Level 10 to graduate at the head of their class. Gain levels by defeating iconic villains, recruiting Allies such as Wolverine, declaring an X-Affiliation, and using special Powers and Items like Silver Samurai’s Sword. The X-Men Munchkin Game is a must have for Marvel Comics and X-Men fans. Ages 10 and up. 3-4 Players.