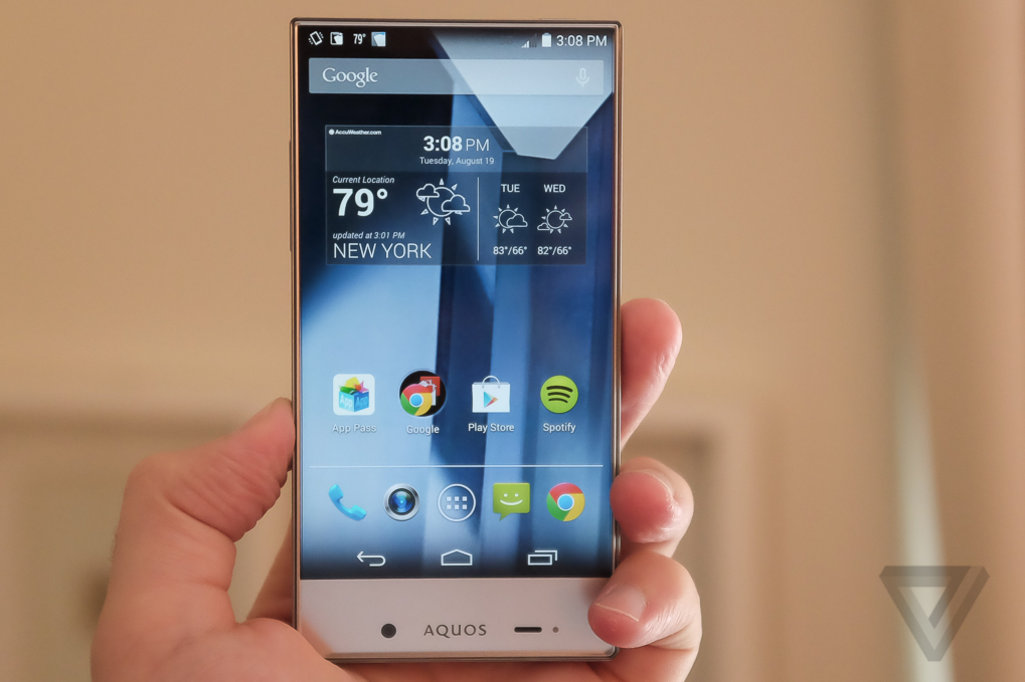 This week, Sharp, Softbank, and Sprint announced a new line of devices called Aquos Crystal, which feature full-screen designs like nothing we’ve seen before. Sprint confirmed today that it would be getting the 5-inch Aquos Crystal smartphone, a new mid-range device unlike anything else in Sprint’s or other US carrier lineups. Oh, and it’s going to sell for a measly $239 without a contract (or $10 per month with Sprint’s Easy Pay plan or $149.99 on Sprint’s prepaid Boost or Virgin brands).

The star of the show is the Aquos Crystal’s 5-inch, 720p edge-to-edge display. There is virtually no bezel surrounding the screen, making it the first smartphone we can truly call “edge-to-edge”. It’s remarkable to see in pictures, but in person, it looked like something taken straight out of a science fiction movie set. I couldn’t stop looking at the screen — it’s really that striking. It reminds me of an infinity pool that has no edge.

But there is an edge here, and it’s beveled and sharp. The Aquos Crystal is a little thicker than most smartphones today, but it has a matte plastic back that’s slightly dimpled (but not as dimpled as Samsung’s Galaxy S5). It feels less premium than an HTC One or iPhone 5S, but I can’t say it feels cheap by any means. It’s also much smaller than you expect a 5-inch smartphone to be because of its edge-to-edge display.

The Aquos Crystal runs Android 4.4.2 KitKat with minimal to no interface modifications. Sprint is including a couple of new software features on it, including a gesture-based screenshot tool and App Pass, a subscription based app service. Similar to a “Netflix for apps,” App Pass costs $4.99 per month and provides unlimited access to a number of premium apps, including games and productivity tools. It also includes $5 of in-app purchase credit that can be used in the apps downloaded from the App Pass store.

Those looking for premium smartphone specifications won’t be impressed by the Aquos Crystal’s 1.2GHz quad-core processor, 1.5GB of RAM, or 8GB of storage (there is a microSD card slot to expand on the internal storage). But otherwise, the Crystal has all of Sprint’s latest features, including HD voice, Wi-Fi calling, Harmon Kardon audio enhancements, and support for its faster Spark LTE network. And for its price point, the Crystal is really offering a lot on paper.

Talking on a phone with no bezel and no apparent earpiece is a little odd, but you hold the Aquos Crystal up to your ear in the same way you hold any other phone (no, you don’t have to turn it upside-down to talk). Because nearly the entire front is display, it lacks a proximity sensor, but Sharp’s software will lock the display when on calls so you don’t accidentally press buttons with your ear. I didn’t have enough time with the device to truly test out how well it handles inadvertant swipes from the edge with my thumb, but we’ll be sure to put that through its paces when we have a review unit in.

Sprint also introduced a new family plan this week that offers 20GB of data for the same price that AT&T and Verizon provided 10GB. And for a limited time, new customers can sign up for a $100 per month plan that covers 10 lines with unlimited text and calls and 20GB of data to share. Each line on the promo plan also receives 2GB of extra data until the end of 2015. Pair that with the Aquos Crystal, and Sprint suddenly just became an attractive value for a lot of people, provided it offers coverage where they live.

Sprint isn’t saying exactly when the Aquos Crystal will be available, but it says we should expect it in the near future. We’re looking forward to spending some more time with it, but until then, check out some more pictures below.