Here is something that might come in handy for the zombie apocalypse…a Leatherman Tool Bracelet!

Yes, that’s right – Leatherman has come out with a new multi-tool bracelet, the Tread. I’ve seen belts with screwdriver bits, and credit card-sized thingamajigs that are carried in your wallet, but this is the first time I’ve seen a wearable multi-tool or anything like this.

The Leatherman Tread is built with high strength and corrosion resistant 17-4 stainless steel links, with each link offering 2-3 tools and functions. Even the clasp, with its bottle opener and #2 square driver, is functional.

A full bracelet offers up to 25 usable tools and features, such as screwdriver tips and box wrenches. And since they’re worn on your wrist, they’re available anytime, and anywhere. 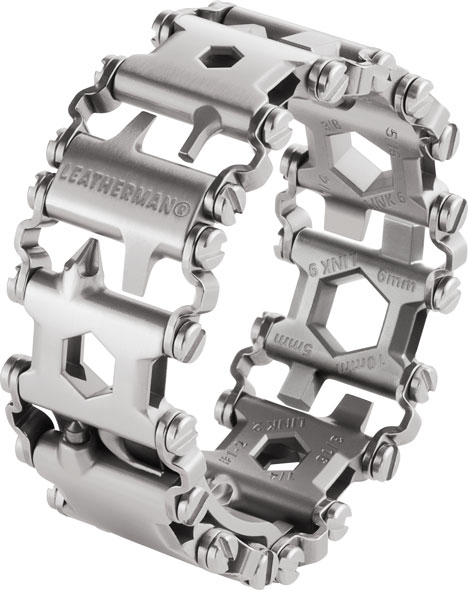 The Tread multi-tool bracelet is fully customizable. You can rearrange the links to suit your preference, or remove links so that the Tread better fits around your wrist. According to Leatherman, you can adjust the wrist size to 1/4″. Each link is connected to the next using slotted fasteners, and so you could even remove links and tools in the field if needed.

It looks like each link has a lot of rotational freedom, and so you should be able to use each tool and function without having to take the entire bracelet apart.

Leatherman also says that the Tread multi-tool bracelet is TSA-complaint, and so you shouldn’t have any difficulty traveling with it. 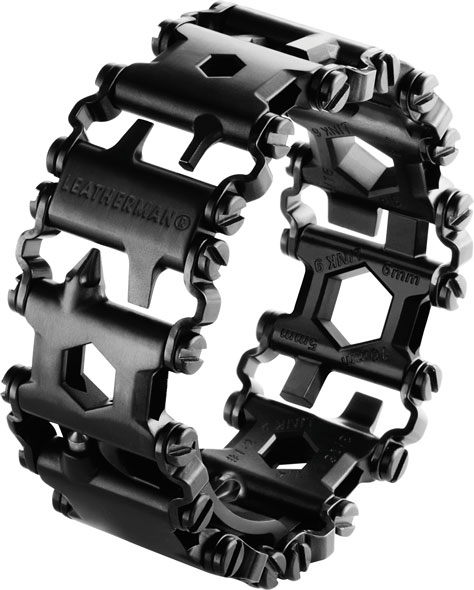 The Tread bracelet will be available in stainless steel and also with a black DLC finish.

The Leatherman Tread is built up using 10 separate links that include the 2 clasp components, 7 full-size links, and 1 smaller link for finer size adjustment.

Leatherman hasn’t provided a full list of screwdriver and wrench sizes, but it looks like there are Phillips, slotted, and a couple of hex driver sizes, and both metric and imperial wrench sizes. Each link has size markings on the underside for easy identification.

Individual links will also be available separately, in both stainless steel and black DLC styles. 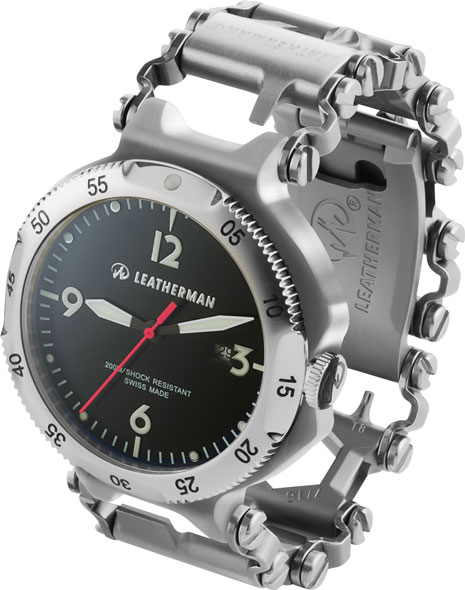 There will also be the Tread QM1, which comes with a Leatherman-designed and Swiss-made timepiece with precision quartz movement. The QM1 will feature a shock and scratch-resistant sapphire crystal face to ensure years of heavy duty wear, and the curved geometry increases outdoor visibility while limiting reflections. 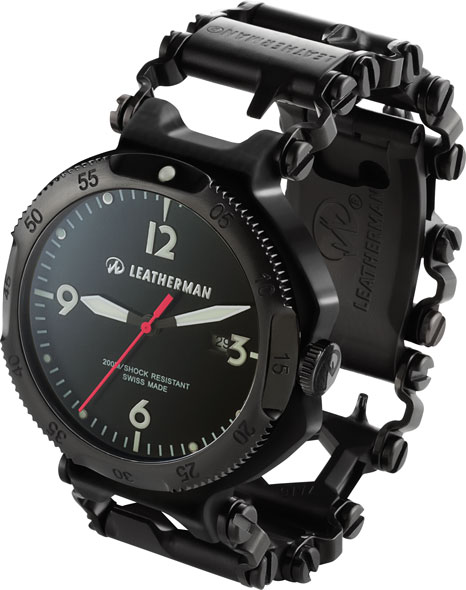 The watch will be available in two versions, same as with the bracelet. There will be a stainless steel Tread QM1, and one with a black DLC finish.

It appears that the QM1 will come with a full bracelet and the watch component, so that users can configure the watch’s links to their needs.

In today’s day and age, with wearables being used to describe fitness trackers and the such, it’s nice to see a wearable multi-tool. I have seen tool-related jewelry and accessories, but this looks to be the first functional multi-tool wearable.

It looks like the links are nicely curved so as to not snag on the outside or poke skin on the inside. The Tread bracelets, and especially the Tread QM1 watches, will probably be a little weighty, but perhaps not much more so than a regular metal-banded watch (excluding titanium ones). The box wrenches should help to reduce weight at least a little bit.

Here’s a thought – maybe Leatherman could/should come out with a titanium Tread multi-tool bracelet as well! Although, if the stainless steel Tread bracelet will be listed at $150, I don’t want to think about how much a titanium version will sell for. The tooling and costs required to make Ti links will probably result in prohibitive retail pricing.

The Tread bracelets look great for a lot of different types of users. They also look pretty snazzy, at least to me. I don’t think I would wear one just for the aesthetics, but if I’m going to wear something on my wrist that I would have to look at all day, it shouldn’t look overly utilitarian.

The prices are a little steep, but the links probably require a lot of machining steps. As mentioned, each link is attached to the next using slotted screws, and all of the screwdriver tips look to be precision machined. This should make the screwdrivers and drivers, such as the Phillips tips, far more usable.

What I especially like is that the tread is said to be TSA-compliant. I don’t often need screwdrivers or wrenches when traveling, but sometimes the need does come up.

The watches are a little pricey, at least for my budget, but probably reflect production costs of the Swiss-Made mechanism and what sounds to be a curved sapphire face. Maybe Leatherman or an independent maker will come out with some kind of adapter that could allow the Tread to be used as a watch band for other brands’ watch heads.

I think the Tread looks awesome. A little pricey, maybe, but that’s not a big deal if it’s as usable, durable, and long-lasting as described.