This past Saturday I attended the annual WinC Con 2017!!

WinC, the Women in Comics Collective International is an “artistic and informative initiative educating communities about the role and merit of women working in comics”. Since beginning in May of 2012, WinC has been aiming to diversify the comic book world.

I had the opportunity to speak with many talented artists and creators about their work; even some familiar faces. These conventions are similar to Artist Alleys and offer a better chance of getting to actually speak with creators about their work and inspirations. I love hearing new stories, seeing new characters and supporting indie comics. Sure everyone loves mainstream comics, but it’s great to see new and fresh ideas come to life!

This event inspires motivation and creativity while offering an opportunity for diversity.

Women in Comics to check out

I had a good time talking art with Sha-Nee. She drew some bad-ass female characters and I was really drawn to her style. I picked up a couple of her bookmarks, I absolutely loved that idea.

She works in digital but also told me about her preferred preference for watercolor and markers, and recently working with gouache, and that it’s okay to still like traditional mediums.

Check out more of her artwork HERE:

Another really cool artist which I had the pleasure of meeting is Irene. Her booth had really cool fan art; including prints, stickers, adorable key chains and phone charms! She even had merchandise of her own original characters. I picked up her awesome book; Era Ibuki, which is a “Flash” flip book! I was instantly drawn to the style of artwork, the shape of the book, and the beautiful packaging. 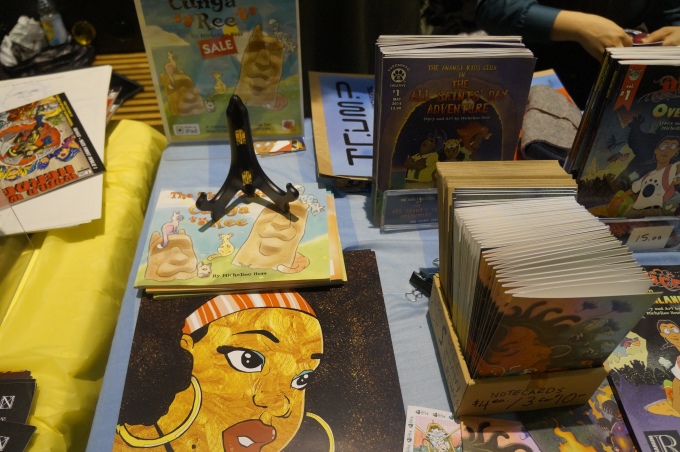 Learn more about Micheline and her multiple projects HERE: 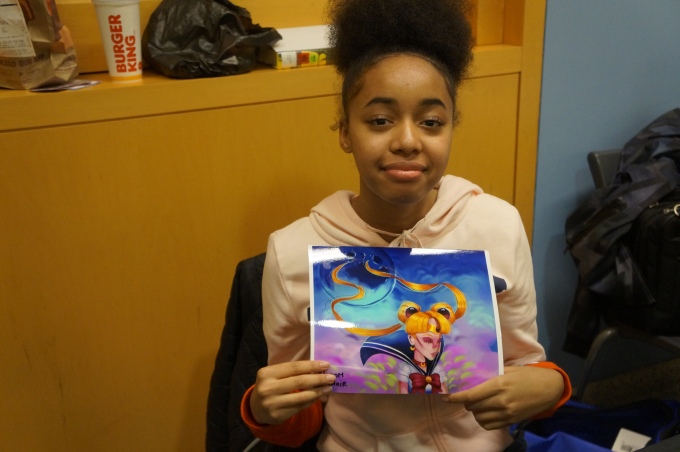 A very talented writer Greg, that I had met at a previous con introduced me to his little sister Blair. I was blown away when I saw her artwork. She is only 17 years old!!! Her digital work is amazing, I can only imagine how great she will be if she continues to pursue art.

She has some serious Skills !

One of the main objectives of WinC is to

promote Diversity in the industry.

I was able to attend the Latinx Panel.

“The word “Latinx” (pronounced “La-teen-ex”)… while many people are using the term and identifying as Latinx, there are still others who may look at the word with skepticism and confusion.

Latinx is the gender-neutral alternative to Latino, Latina and even Latin@. Used by scholars, activists and an increasing number of journalists, Latinx is quickly gaining popularity among the general public.” -huffingtonpost

This panel consisted of four female professionals in the comic book industry. They discussed the poor representation of Latinos in comics, as well as in the media.

Latino characters are not properly represented and cultural identities are being erased. There are many different Latin American countries with different customs and traditions.

Every culture has different backgrounds, customs, dialects, slang , etc. There are stereotypes of how we all look, talk, and even what we eat. We are portrayed as one look, acting one way, even speaking one way.

An example given was in a comic book; New Yorkers were speaking with Mexican slang! We are not So Cal! We most definitely do not speak like that in the city.

They also discussed limited roles in media such as movies and television. Being Typecast as one way, and stereotypes in media.

Even in Novelas [Spanish Soap Opera] there’s this misconception that light skin represents beauty and wealth. That’s ridiculous, why are dark skinned people always portrayed as the help? This needs to change!!

They stressed the importance of creators doing the background work needed to accurately portray characters of other ethnicities. We need to break away from this norm and send a message that the Latino community matters. It’s the RESPONSIBILITY of creators to properly embody each identity of a character. Use social media, to voice how you feel, to express the kind of people that we want to see fairly represented.

We need to go ahead of Marvel & DC and make them catch up to us. So Support, get these stories and experiences out there!!

In order to do this, everyone needs to SUPPORT: buy independently created work, make your own, spread the word!!

*Make sure to check out upcoming WinC events HERE !!

WinC also has some more upcoming events and workshops all over NYC, and they are expanding! I recommend anyone interested in comics and art to attend. Especially artists or writers looking to learn more about the industry, or ways we can help diversify the industry.

*Also Check out my interviews with Women in Comics that will Motivate You Part 1 & Part 2 !!!

HI! My name is Nadya Martinez AKA GothamGeekGirl; I’m a comic book enthusiast, annual comic con attendee, movie loving, art freak. Writer/ photographer for G33K-HQ and GothamGeekGirl who loves to draw comics, cosplay, read indie comics and connect with other geeky minds. Always looking for what's new in comics, gaming and entertainment, helping to promote brands, events and creators across the Geek community. I am also very inspired by Japanese culture, hence I am learning the language!!
Previous Tech: Watch This Iron Man Like Flight Suit From Gravity Industries Take Flight
Next Culture: “Cosplay is Not Consent” Videos From ‘Two Geeky Guys’